Satch Hoyt: You know this interview is for my blog, Afro-Sonic Mapping: Tracing Aural Histories via Sonic Transmigrations, so I’m actually looking at black narratives from a sonic perspective. Obviously you were in the UK at a very important period – a transitory period. And there were a lot of amazing musicians coming through. Would you like to talk a little bit about some of the musicians that you met and what was sonically going on in that particular period of the ‘60s?

Margaret Busby: Well, I’ve talked about my late ex-husband, Lionel Grigson – he was a jazz musician. He played trumpet and piano. After he graduated, he was involved with the university jazz group. In London he used to play at this place called the Troubadour on Old Brompton Road; a lot of musicians came through his group and played there. In fact, just down the road from that place was a pub, which was actually a gay pub, but it had a West Indian session on Sunday at lunchtime, I believe. So, a lot of West Indians came through.

SH: Did you know Joe Harriott?

MB: Yeah, I knew Joe Harriott. I was also thinking the other day about this Trinidadian, David “Happy” Williams, who actually used to play with Lionel. He went to the States and ended up playing with Cedar Walton for decades. Freddie Redd was also in London at one time; there was also Alexis Korner – so, blues and jazz musicians. Fela’s fusion was also going on. Actually, I published a book about Fela in 1983 – called Fela, Fela: This Bitch of a Life.

SH: Who wrote that book?

MB: A Cuban friend of mine called Carlos Moore. He was in Paris for a long time – that’s where I first knew him.

SH: What period was that?

SH: That’s when James Baldwin and Richard Wright were there, as well.

MB: Yes. There were a lot of expatriate blacks in Paris in that era; they were all connected. There was Carlos, there was a Jamaican called Lindsay Barrett, who’s a writer and wrote about music – he’s still a friend of mine.

Back in the ‘60s, I also saw Black Orpheus and fell in love with Brazilian music. In fact, I started to learn Brazilian Portuguese just because I loved the music and wanted to understand the lyrics. I remember one song seemed like the beginning of a novel; it started: “I’ve got the marks of her teeth on my arm.”

SH: All of those instruments in Brazilian music – the berimbau or the cuica – are actually Angolan instruments, which is quite amazing. I was in Luanda last year working on my project. I’m actually looking at the way the music left the continent; I’m arguing, in fact, that the slaves acted as portals and carried this mnemonic network of sounds over to the Caribbean basin and the Americas. Then, amalgamations occurred in New Orleans with French classical music, creating jazz in Congo Square and so on and so forth.

MB: And then going back to Africa. 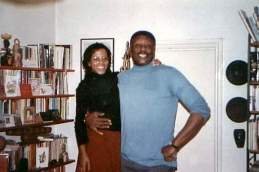 SH: Exactly. For instance, with Franco and the rumba in Congo. Or with Fela studying here, then going to America, meeting the Black Power Movement, and then his music becoming politicized, as well as all of the jazz influences that occurred.

MB: Well, even with people like Randy Weston. In fact, one of the early books I did – around 1970 – was by Valerie (Val) Wilmer and it was called Jazz People. It featured interviews with about a dozen jazz musicians, including Randy. Actually, one interview she had done was not quite an interview – it was with Miles Davis and went like this: “When I said later, baby, I meant later.” That’s what she got from Miles.

SH: Do you have a Miles Davis story?

MB: I heard him in London. I think the last time I heard him was not long before he died. I used to go to Ronnie Scott’s a lot and I heard a lot of good people there. It’s funny how in those days you took things for granted; like, you’d just hang out with Freddie Hubbard after a gig, or whatever. I was sharing a flat with my sister in Belgravia and Freddie and his then-wife would come by. I actually used to write song lyrics, as well.

SH: Who did you write song lyrics for?

MB: For my husband and his band. The singer Norma Winstone also sang some of my lyrics – lyrics to something called “Some Time Ago”. Norma recorded it, as well as some Brazilian singer. In fact, by chance I came across a CD and there was this singer, singing my lyrics – I’m not sure how she found them. So, not a lot was recorded, but I used to write a lot of lyrics.

SH: What about the Brotherhood of Breath – did you know those guys: Chris McGregor, Louis Moholo and Mongezi Feza?

MB: Yes, of course. Abdullah Ibrahim is also a friend of mine. A lot of them played in a jazz club – the Jazz Cafe. Happy Williams played with Lionel; Philly Joe Jones, the drummer, was in London for ages. He used to hang out with us. There were quite a few who came through London at that time.

One Reply to “Margaret Busby: What it takes to be the first Black Woman Publisher in the UK – Part 3”