After enduring nearly three weeks walking past the Michael Jackson casa, situated just a stone’s throw away from Igreja de Nossa Senhora do Rosário dos Pretos (Church of Our Lady of the Rosary of the Black People) in Pelourinho – which can be seen 23 seconds into Jackson’s video for They Don’t Really Care About Us – I finally got over all the tourists taking selfies and group shots with drummers, all the trinkets, souvenirs and the out-and-out commodification of the house as enterprise, and started to analyse, in this present moment of social and political unrest in Brazil, just how loaded Jackson’s act of shooting the video for They Don’t Really Care About Us for his 1996 album, HIStory: Past, Present, Future, was at that time – and still is now. Jackson embraced and empathized with Brazilian Blackness at the height of his lightness. His brief sonic migration to Brazil to make a socio-political statement of that magnitude remains extremely relevant today. Jackson’s gift of giving global visibility to Brazil’s racially stratified, class-based society that continues to lock black people in Favela poverty where social injustice remains in the hearts of those impoverished Brazilians, is deserving of big accolades. 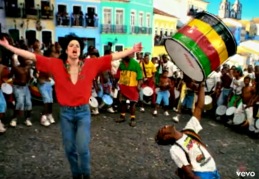 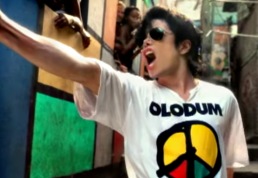 Stills from Official Michael Jackson video for “They Don’t Really Care About Us” (Brazil Version) as seen on YouTube. (C) 1996 MJJ Productions Inc.

Musically and visually, Jackson also entered into a Transnational African Diasporian dialogue with the activist bloco-afro drum collective, Olodum. It gave them massive exposure, not only garnering worldwide success, but also facilitating their educational and social programs in Salvador. To drive home the point and give the project more political weight, he hired activist filmmaker Spike Lee to direct two videos for the song, which was the fourth single on the album (the second video was shot in a US state prison and featured inmates, as well as archival images of historic police brutality towards African Americans).

Fifteen hundred police officers and fifty locals were hired to cordon off the filming location in the Santa Marta Favela in Rio de Janeiro. The Brazilian government was strongly opposed to Jackson shooting the video there, as it exposes Brazil’s slum conditions to the world. State authorities tried, unsuccessfully, to ban the production of the music video. In fact, Ronaldo Cezar Coelho, then state secretary for industry, commerce and tourism, demanded editing rights. A judge had even banned filming entirely; however, the ruling was overturned.

To summarise the video, we first hear a woman’s voice softly state, “Michael, Eles não ligam pra gente”, which is the title of the song in Portuguese. In the juxtaposition in the opening shot of the famous open-armed Jesus monument above Rio de Janeiro, Cristo Redentor (Christ the Redeemer), and Jackson’s outstretched arms at the window of the Salvador house, I clearly read an activist plea, delivered with angry, provocative desperation. Thirty to forty seconds into the video, a muffled, near-inaudible voice is heard, which sounds to me as though it’s coming from a police intercom. Jackson first exits through a doorway; raising his arms, he gives the finger to the military police, and continues to make that statement throughout the video. This is, no doubt, the most politically engaged song in Jackson’s entire oeuvre, which, twenty-two years after its release, in today’s Black Lives Matter epoch, remains a timeless anti-racist anthem. The lyrics and imagery percolate into an audacious, subversive, abrasive amalgamation of all the genres of music that Jackson was embracing at the time, seamlessly adding quasi-militaristic Olodum samba drum patterns to the mix. Jackson was relentlessly defiant and jumped hurdles to enable the world to see Favela disenfranchisement – which could be lightly compared to parts of his pre- Jackson 5, Gary, Indiana upbringing. Michael Jackson flaunted his world-star position to tell the continuing narrative of race and class disparity and police brutality, which is still prevalent in contemporary Brazil and the Transnational African Diaspora at large. At the last dinner I attended in Salvador, I was informed that 37 black males were shot in one week by the Salvador police force: RIP Marielle Franco; RIP King of Pop.

They Don’t Really Care About Us [Verse 3]